You are currently browsing the monthly archive for May 2008.

I saw this in Wood magazine a few months ago and it seemed like the perfect solution for my cramped shop. It’s made from maybe a half dozen 2×4’s, some pegboard, some scrap plywood and a little scrap MDF on the top. Oh, and four 4″ double locking casters from Grizzly — probably the most expensive part, but well worth it.

It’s pretty much all half-lap construction. I modified it to fit these tools, and added a little rack to hang a couple of roller stands. The pegboard is set into grooves that were cut in the centers of the 2×4’s before it was all assembled (clearly). The shelf rails are not adjustable. Well, unless I want to unscrew then and move them. You can also see here how I mounted the tools. I used a dremel tool to saw off the ends of the bolts. There is more scrap pine glued to the bottom corners to help support the wheels.

The spring clamps are on a 1/2″ MDF scrap that I notched for a couple pieces of scrap pine. I glued in the pine, and screwed them into the MDF from the back, then screwed them onto the side of the rack. A bunch of my cheap but incredibly useful clamps go on two sets of these racks. I used a dado blade to notch them out so the bars just fit. I don’t expect this to be a long-term solution because the notched pine is pretty weak.

It was really easy to build. Let me know what you think! (Click for larger images.)

I finally got around to building one, pressed primarily by another project I’m working on that requires a lot of half-laps in 2×4’s. At first I was thinking of building Black Wallnut’s jig but I decided to take the easy way out instead and build a quick fence-riding one based on the picture in this BT3Central article (which I found through Google.) I didn’t actually read the article because the diagram looked pretty self explanatory.

It was really quick and easy to build and it works like a charm. Now that I have it I can’t believe I didn’t just take the time to make it before.

I used MDF mainly with a little scrap oak and a touch of scrap pine to make it easier to hold on to.

Not very pretty — but it works great! 🙂

Here’s what I ended up with: (Click for larger images.)

I finally put the last of the mulch down on the raised garden I built for my wife. The darker/moister mulch is what I just put down.

Here’s the view from the back — it shows how the wall disappears into the hill, and the lower edged planting area in front of the wall. In the background you can see the remaining drainage work I need to complete. Water collects in the area of the gray rock/drain. I’ll be putting big rocks (9″-1′ rocks) along that same contour and filling the left with while river rocks after grading it a little better toward the underground drain. The right side will be graded a bit better, too, so the water doesn’t collect there either. 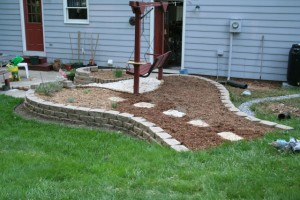 This one is from the garage door. You can see the steps leading up to the bench swing, and way in the background you can see the play structure I’ve been building for the kids. (It’s not yet finished but it seems like the whole neighborhood loves to play on it.) 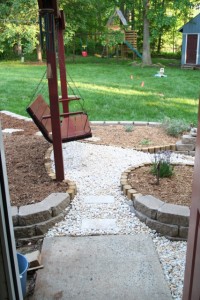 This angle makes the garden look a little like a Pillsbury dough boy hand puppet. I was basically winging it as I built it, so that was a bit of a surprise when I realized it. On the very edge of the frame in the rocks on the left, there’s another drain that collects all the water from that nook and runs it along the concrete patio, under the “path” to the swing, and out into the yard where it connects with another underground drain. (Excuse the mess in the bkgd!) 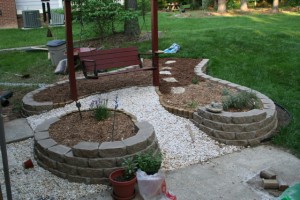 Here’s a little drink holder I threw together to hold my beer. I’ll make one for the other side, too, and then paint them. 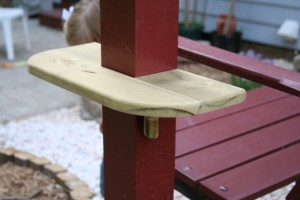 Here’s the little girl who was hiding behind the drink holder in the previous picture. She loves to sort the rocks. 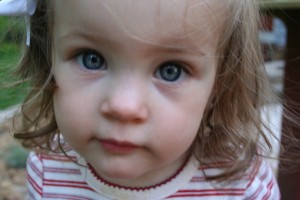 Let me know what you think! This was my first real landscaping project and it was loads of fun!