3D printers are an exciting new technology just starting to gain a foothold in schools. Once built, a printer facilitates many creative endeavors and links to math, science, art, and more. Building a 3D printer is a great project for a school club or a project-based classroom because students have to integrate STEM skills and work as a team. Students who build a printer from scratch (as opposed to just buying a kit or a completed machine) will have a detailed understand how it works and will be able to properly maintain and operate it.

Highly Configurable Wheel (One Wheel To Rule Them All)

I built a framework for robot wheels a while back using OpenSCAD and used it to create a few different wheel styles. I recently decided to combine them all into one massively configurable wheel model, and add a number of new features as well. The result is an OpenSCAD file with 46 parameters that provides a limitless set of combinations and wheel designs. I call it One Wheel To Rule Them All.

It includes twelve tread patterns (all configurable in often surprising ways), eight core spoke patterns (also highly customizable), configurable support for o-rings, bands, and even optical encoder timing slots (directional and non-directional), and a lot more. Plus, I’m still adding features as I think of them.

First, here are a few images of the types of the various basic elements, as well as a few variations that show the flexibility of the designs. For example, as shown in these images, the Spiral style can be used to create a variety of interesting designs that you might not think of when you think “spiral.” After the images you’ll find full details on the parameters.

It’s important to note that you can configure this wheel to such an extend that it may not be printable at home with extruded plastic printers. In these cases, services such as Shapeways could come in handy.

The source file is available at http://www.thingiverse.com/thing:21486, or on github at http://github.com/alexfranke/Highly-Configurable-Wheel.

The rim sits at at the outside of the spokes and supports the tires or added treads. Installed tires (such as o-rings, rubber bands, etc) are set into grooves carved out of therim, while trads are added onto it. Keep this in mind when you’re using tires — as an example, the rim height should not be smaller than the radius of o-ring tires.

The rim also supports rotary encoder timing holes for wheel feedback. Use the padding parameters to adjust the location of those holes. See the compiler output for helpful information about the distance indicated by each timing hole. Directional timing holes will produce a second set of holes that are 90 degrees out of phase with the first. This allows you to stack sensors at the same location over the wheel instead of trying to position them along the circumference. Directional timing holes essentially double the resolution. You can also double resolution by looking for both rising and falling edges.

In this section, specify the properties of the tire tread you want to render. If you’re using a wheel (e.g. o-ring, rubber bands, etc), then use either the “o-rings” or “slots” settings, which will cut a groove (or grooves) in the wheel rim to fit the tires. The othertreat styles will render a tread pattern protruding out from the tire surface by the amount you specify in third part of “knobSize”.

Imagine the tire is mounted on a robot and facing straight at you. The “knobSize” parameter defines the size and shape of knobs in an [x,y,z] format, where x goes across the rim, y goes up and down along the perimeter of the wheel, and z protrudes out from the wheel toward you.

The “staggerOffset” parameter allows you to stagger knobs across the tire by an amount you specify. Set this to zero if you want all the knobs lined up along the perimeter and aligned with the edges of the rim.

“numberOfKnobs” specifies how many knobs there are across the tire, and “lineThickness” specifies how thick the lines are from “drawn” tire styles, such as “x”, “cross”, and “zigX”. You can use these pameters together in creative ways — for example to extend a single tread profile across the width of the tire, or to create a contiguous zig-zag.

Finally, “radialTreadSets” defines how many sets of treads are rendered around the wheel. Each set contains two rows in order to create the staggered effect.

This section is used to define the spoke style of the wheel. Some of the properties are only applicable to certain wheel types, and these properties can be used together in creative ways to create a wide range of tire designs.

The spoke styles are:

These properties define the hub — or how the wheel connects to the motor. The default values for the captive nut are precise for a M3 nut and will make the nut a very tight (if not impossible) fit. I prefer this because it allows you to “melt” the nut into place with a soldering iron. However, if you don’t have a solder iron or prefer a looser fit, then just adjust the nut diameter and thickness. (M3 hardware is, by default, set to 3mm screw diameter, 5.4mm nut diameter, and 2.3mm nut thickness.) Similarly, the holes for the motor shaft and grub screw are also precise. This allows the holes to be drilled out for a more precise fit. Again, you can adjust these to suit your needs.

The hubZOffset can be used to “sink” the hub into the wheel, and it defaults to half the wheel thickness. For example, when the hubHeight is 10 and the hubZOffset is -2, then the hub will protrude 8mm from the wheel, but the shaft hole will be 10mm deep. The set screw will still be positioned in the middle of the exposed vertical height, and the fillet/chamfer will also be rendered in the correct position. This property is also useful if you want to poke a hole entirely through the wheel. (e.g. If the wheel is 6mm thick, set the hub height to 16 and the hubZOffset to -6, and you’ll get a hub that protrudes 10mm from the wheel surface with a hole that extends all the way through the wheel.)

To mount a servo motor, set includeHub to false, set shaftDiameter so that the hole will accommodate the servo horn screw and any bit that protrudes from the top of the servo horn. Then set the servoHoleDiameter to the size of your mounting hardware, and set servoHoleDistance1 and servoHoleDistance2 to the total distance between mounting holes on your servo (not the distance from the center). These sets of mounting holes will be rendered at 90 degree angles from one another. If you only want one set of holes, set one of the values to zero. Adjust the angle of all the holes to avoid openings in your wheel design if necessary using servoArmRotation.

Use innerCircleDiameter to specify a solid inner circle to use as a base for the hub. This can be useful if you need a a solid surface for servo mounting hardware or for the base hub fillet/chamfer.

Use outerNutTrap to create a nut or bolt head trap on the outside (bottom) of the hub area. Used in conjunction with shaftDiameter and false for includeHub, this will create a wheel that can drive a bolt much like the large gear on Wade’s Extruder. (This feature is inspired by that design.)

Use servoNutTrap to create nut traps for bolts used to mount the wheel onto servo arms. This feature was suggested by AUGuru.

Math Monday came early this week, and we had some fun exploring Reuleaux triangles. Next to a circle, they’re the simplest curve of constant width you can make — that basically means you can roll a plank on top of them as smoothly as on wheels. The kids didn’t expect that one! (They also would make great manhole covers!)

Although they roll very smoothly, they do tend to wobble around a bit, so I built a little gutter on the plank to make it easier for the kids to experiment with. It was a quick project, and lots of fun for the kids. You don’t have to use a band saw or even the sander; all you really need is a jigsaw or coping saw, some scrap wood, and some nails.

To mark the 63rd anniversary of the first stored computer program to run (June 21), I rewrote the original code in C# last night, both using the original algorithm (that was never intended to be efficient) and using a more modern structure. The Kilburn Highest Factor Routine finds the highest factor of 2^18, and completed with the correct answer in 52 minutes with 3.5 million operations. It was written by the late computer pioneer Tom Kilburn and run on the Machester SSEM (“Baby”).

The code is written in lines 1-19, lines 20-22 contain some control flow values, lines 23 and 24 contain 2^18 and the current factor to test, and lines 25-27 are working memory.  Click for a larger version of the original image from The National Archive for the History of Computing. 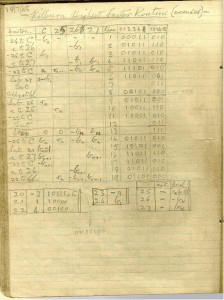 The last three columns (labelled 13, 14, and 15) are the instructions, and there are only a few of them. They are:

The first version in the listing below follows the original algorithm (and yes, you can use “goto” in C#). There’s a lot of subtraction involved because if you’re short on space and only want to implement one arithmetic operator, you’re better off implementing subtraction, because you can so addition with it, too. “S” is used here to indicate the Storage tube, which stored both the program and the working memory. The accumulator (represented by the variable “acc”) and the program counter used different tubes. The program counter is what kept track of where the computer was in the program during execution.

The only slightly optimized C# version at the bottom takes less than a millisecond today.

PiShop: Your Name with Digits of Pi

This makes a great gift, t-shirt, mug, etc. for any computer or math geek, friend, child or baby! Write you name or message in up to 100,000 of the infinitely non-repeating digits of pi. PiShop is a free online application that allows you to generate customized image to use as a t-shirt transfer, banner, or whatever else you want to use it for. It’s free for personal use, but if you like it, I encourage you to make a little donation for my kids’ college funds! 😉

PiShop: Your Name with Digits of Pi

The application is available on my CodeCreations.com site where I keep programming-related content. Here is the direct link: http://www.codecreations.com/site/software/38-applications/60-pishop-your-name-with-digits-of-pi. The introduction is on Page 1, the application itself on Page 2, and tips on making the shirt on page 3.