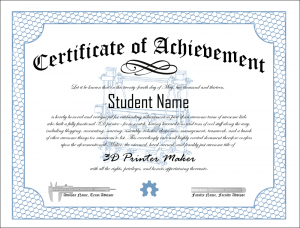 The border features the typical honeycomb-style infill pattern that 3D prints often use.

Here’s the text of the certificate:

Let it be known that on this twenty-fourth day of May, two thousand and thirteen,

is hereby honored and recognized for outstanding achievement as part of an awesome team of awesome kids who built a fully functional 3D printer—from scratch, having learned tons and tons of cool stuff along the way, including blogging, accounting, sourcing, assembly, robotics, electronics, management, teamwork, and a bunch of other awesome things too numerous to list. This exceedingly rare and highly coveted document therefore confers upon the aforementioned Maker, the esteemed, hard-earned, and frankly just awesome title of

with all the rights, privileges, and honors appertaining thereunto.