You are currently browsing the monthly archive for March 2002.

When we first moved out to NC, we lived in a small apartment with no room for a shop. I did manage to get some wood into this project, though.

It was the first version of what turned out to be a wife-chaser. It ended up with a camera on top (developed by the fine folks at CMU) so that could track my wife if she wore a red dot on her shoe and didn’t move too fast. Later I hacked an old speech synthesizer chip so I would be able to make it compliment her as it chased her around. (I didn’t quite get that far.) …but then I got a job and now he’s just in a box somewhere.

Notice the beadie eyes (they would wink) and sinister frown. 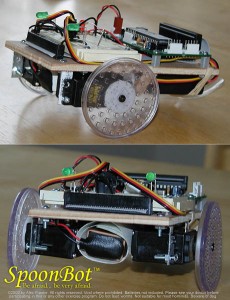