This is the catalog page for a collection of 180 or so photographs taken during the 1910-1911 deployment of SMS Gneisenau to the Far East. SMS Gneisenau was an armored cruiser of the Kaiserliche Marine, or German Imperial Navy. As photos are scanned and posted, links to the posts will be added to this catalog listing below.

WARNING: Some images in this collection, particularly those depicting death or nonsexual nudity, may be disturbing to some viewers. If you are sensitive to these types of images, or if they are prohibited in your area, then do not view them. The pages that contain these images will be marked appropriately. 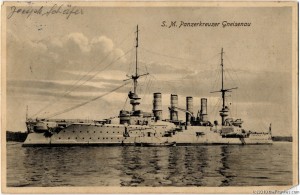 The dates and ports of call visited on the deployment were as follows. (A composite image of the travel chart is available below.)

Additionally, there are scans of 380 Kaiserliche Marine postcards, as well as some of his other souvenirs.

About the images: These images were scanned and then digitally enhanced to correct for fading and tone. They were then reduced in size to no greater than 1000×1000 dpi. The captions provided were written underneath the photos. The image names consist of the name “Gneisenau” followed by a number and a letter. The number indicates the page number of the photo album on which the image was found, and the letter indicates the order of the images on that page, read from right to left, top to bottom, as in a book.