You are currently browsing the archive for the Technology category.

We just remodeled our kitchen. A few months ago we had an electrician come out to give us an idea of what it would cost to add in under-cabinet lighting. Five fixtures came in at about $1,800 with a few hundred of that going to a circuit extension. I’m a tinkerer, and that just seemed excessive to me, so I decided to do it myself and saved over 95%.

Now, for about $56 plus time, I have a much better lighting system with three zones of under-cabinet lights, each with its own dimmer, and in-cabinet lighting for some of the deeper cabinets. Here’s how I did it.

I order a lot of tinkering supplies direct from China, and this project is no exception. It can take some time for the supplies to arrive that way, but I’ve never had a problem with the quality. With the exception of the one power supply everything is 12V.

From various AliExpress vendors: (I actually ordered a lot more than I needed for the kitchen here because I’m adding lighting to other areas of the house, too…)

I cut tiny squares of 1/4″ plywood and screwed the LED channel mounting brackets to them, and then I hot glued those plywood spacers at the front of the cabinet, directly behind the face frame. This extends them just enough so that the shadow of the face frame falls just outside of the countertop itself and provides a little more opportunity for air cooling. (You can’t just hot glue the LED sticks to the cabinet because the LEDs will just melt the glue.)

The wires are pretty well hidden and they look tidy. For the upper cabinets, the wires usually enter the top cabinet right behind the face frame at one side, travel all the way down through the cabinet fastened to the back of the face frame, and exit at the bottom. There, they enter either one of the 70x45x18 boxes if the zone needs a dimmer, or one of the 50x28x15 boxes if I’m just hiding the connectors.

I used the 70x45x18 project boxes when I needed to include any of the dimmer electronics, and basically drilled holes where I needed them based on what wires were present and where they needed to enter for each specific location. The original boxes were pretty big and ugly, and the result is much cleaner.

These photos are for the desk lighting (Zone 7). You should probably be comfortable with a soldering iron before you try this modification, that that’s really easy to do.

This cabinet contains the 12V, 33A power supply, which will be the sole power source for all the LEDs in the kitchen. (The currently installed lighting draws 11.73A with everything on.) This cabinet also contains most of the the dimmer electronics for Zone 2, but not the dimmer knob.

Exiting this cabinet are:

The three network wire strands and the dimmer-controlled 12V wire enter the top of the corner cabinet at the left and exit at the bottom front left. There, they enter one of the 70x45x18 boxes, where the dimmer knob is mounted and the wires are connected. Remember that the dimmer electronics are actually in the power supply cabinet (Zone 1), because this cabinet is the most convenient location to serve the three distinct areas of the zone (left of the microwave, the corner, and right of the sink).

In the box, the 12V line is split to power the 12 segments under Cabinet 2 (on the left), and the 12 total segments for Cabinets 3 & 4 on the right. (When possible feed the power into the middle of a run like this or else you might start to notice that the LEDs at the end of a run are not quite as bright as the others.)

I haven’t installed these yet, apart from running a single 12V wire from the power supply cabinet through the wall, and then entering the back of the drawer cabinet to the right of the oven. It’s capped off there for later use.

The un-dimmed 12V wire from the Power Supply Cabinet is split above the cabinet, with one branch enters the cabinet at the top left and going through to the bottom left, and another branch going through the wall to the back of the lower cabinet (where it’s capped off for later installation). The wire for the under cabinet LEDs enters a 70x45x18 box containing a dimmer (both the electronics and the knob), and the dimmer-controlled output that that feeds the LEDs.

An undimmed 12V wire from the Power Supply Cabinet enters the left glass cabinet at the top left and goes through to the bottom left, where it enters a 70x45x18 box. The box splits the undimmed 12V into two branches: One goes behind the LED strips to the left and into the pantry (described in the next section), and the other goes into the dimmer housed in the same box.

The pantry wire enters straight into the lower part of the pantry from the junction box in the middle of Zone 7. The wire first goes through a switch that can be used to cut the power to the whole pantry in case any of the limit switches fail closed (on). Then it splits into two: one wire for the bottom left of the pantry, and one for the bottom right. (The upper pantry doors get more natural light than the lower ones, so we didn’t wire those up.)

The in-cabinet lighting doesn’t need to be as bright, so it’s just used single-row 5730 LED bars for these, but two on each side, and again with power going to each set instead of stringing them together. I used V-shaped channels, too, mounted vertically along the inside of the face frame so that the light is projected into the middle of the cabinet instead of toward the back.

Not all zones are complete, and I’m not even convinced that we need more lighting at this point. I think I will try to add some of the lower cabinet lighting, though, just for kicks.

Although I spent a more in total on supplies (because I ordered more than I needed for just the kitchen, and there’s still more to install), the total cost of the supplies I’ve actually used in this project is about $56 — just over 3% of the original $1,800 quote. It’s a lot more functional that what was originally quoted, has more fixtures, and probably looks a lot more custom… and I had a lot of fun doing it.

Guidelines for Disassembly and Reverse Engineering

Explore how the machines work

Here’s a quick update on some of the projects we’ve been working on this year:

We went to the 2014 USA Science and Engineering Festival up in Washington, DC, and we wanted to share it with our fellow school Maker Team members. Here’s the video we produced to do that.

There are live links on the youtube page for the video for each of these segments:

How to Set Up a PCB Heatbed (and cut glass, too!)

In this video, Jacob shows an easy way to set up a PCB heatbed for your 3D printer — a method that allows the entire surface of the heatbed to be used for printing. He also shows how to cut inexpensive certificate frame glass to size with some simple tools. We’ve had printers with a heatbed setup just like this running without incident for over a year.

A project-based RepRap build is the perfect way to bring STEM and many other disciplines to your school. To learn more about starting a 3D printer build at your school, visit http://www.thefrankes.com/wp/?page_id=2766.

3D Printer Club: A Video from the Creator of Slic3r!

Here’s a video to the team from software developer and RepRap expert Alessandro Ranellucci, the creator of the extremely popular Slic3r software.

Random wires are ugly, so we decided to ask for some spare spiral binding coil at the local office supply store and walked away with a handful of 6mm and 10mm coils. They make for very nice wire wrap. 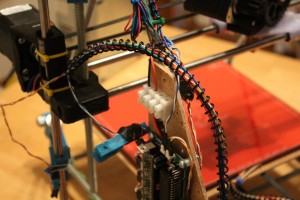 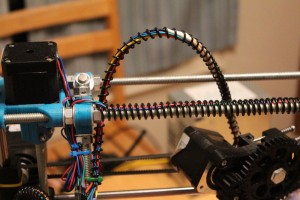 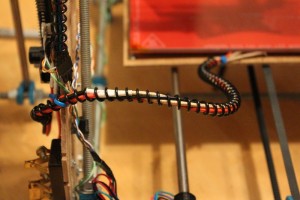 The goal for this video was originally to capture the difference in sound that I noticed when I switched from one driver to the other, and this test seemed to do that. I updated it to be a bit more scientific than it was originally by carefully setting the current limit, adjusting the steps per unit, and including details about the setup.

We got an older laptop to use for one of our 3D printer builds, and so we set out to set it up for 3D printing. The laptop is an IBM ThinkPad T41, and because the processor doesn’t support PAE, we weren’t able to use the latest versions or Ubuntu or Mint. Mint 13 installed okay, but the default window managers gave us some trouble, so we ended up installing Lubuntu 12.04. This version doesn’t require PAE.

After installing and updating the operating system, we set out to install pronterface (Printrun) and slic3r from the git repository. Here’s what we did:

Create a directory for RepRap stuff, and clone Printrun to it from the git repository.

Next comes build-essential, perl, and cpanminus — all required for slic3r.

Go into the Printrun directory, get slic3r, and then dive into that directory where we’ll test it to be sure it all works.

Grab the cpan modules required for slic3r, and test it to be sure it loads up properly.

Step up one directory and make sure pronterface works well.

We went to the Midwest RepRap Festival (MRRF) in March, and Jacob interviewed some experts to learn more about the event, the RepRap project, 3D printing and its future. This video includes a great overview of a delta bot 3D printer, which is pretty new on the RepRap scene.