You are currently browsing the monthly archive for October 2011.

Here’s a 12-channel bidirectional logic level shifter with a 3.3V power regulator that I designed so I could easily interface 5V circuits with cool 3.3V widgets like the ADXL345 accelerometer, the NRF24L01+ wireless transceiver, and the Nokia 5110 84×48 LCD. For the one in the picture, I used round machine pin headers because I use it with hookup wire and those female headers are very easy to separate from 40-pin lengths. 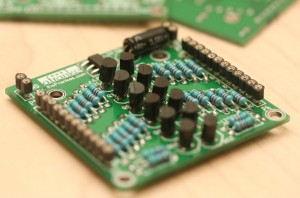 Up to twelve 5-15V logic signals can go into one side and come out as 3.3V signals on the other side, or the other way around (3.3V signals go in and can be read as 5-15V signals) in any combination. The regulator portion converts 5 to 15V DC into a steady 3.3V for up to 1 amp.

In this video, I show how it works translating from 7.5V to 3.3V. The video is from the A Hackable 12-Channel Bidirectional Logic Level Shifter/Translator post.

Why did I not just use a 74HC4050 or some other logic level translator? Because this is much cooler! It’s bidirectional, it has twelve independent channels, in includes a 3.3V regulator, it’s inexpensive, it’s good soldering practice, and it’s hackable. In the photo below, I’ve wired it up to specifically drive a 3.3V Nokia 5110 LCD. It uses only five of the 12 channels as logic level translators, channel two is wired directly to 3.3V for power, and channel 3 is wired directly to ground. The transistor on channel nine is turned so that the 5V signal controls the gate, which allows PWM control of the LED with full power from the regulator. I’ve also used a different resistor. (More photos below.) And why no resistor arrays? Because resistors are usually inexpensive and on hand, and resistor arrays would limit hackability. 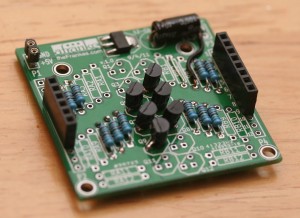 It was designed using KiCAD (free), and PCBs were ordered through SeeedStudio’s Fusion PCB service. All the components are easily available online, at Digikey or on eBay. Here are the parts I used. The costs reflect per items costs for small bulk purchases (usually around 10-50 pieces) on eBay.

The total unit cost was $2.81, plus time and solder. I’ve decided to sell off the extras either as PCBs or as kits, so let me know if you’re interested by commenting below.

Here’s the schematic and a screenshot of the PCB design, as well as a larger version of the image above: 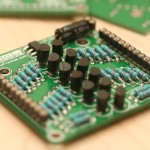 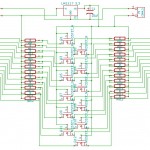 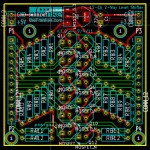 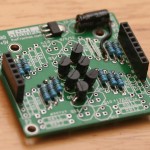 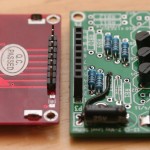 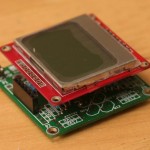 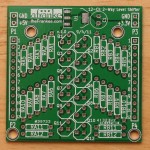 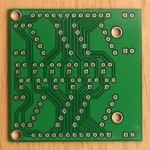