You are currently browsing the monthly archive for December 2012.

December 27, 2012 in Reprap, Teaching, Technology by admin | No comments

Today the blog/P.R. team lead announced to all club members that the team website is now online. It’s at http://www.cpsfcmaker.org/ — go check it out!

December 21, 2012 in Reprap, Teaching, Technology by admin | No comments

During the break, I wanted to set up email lists for each team so they could better communicate: (redacted)

I hope you’re having a good break so far! I have a couple things I hope you’ll be able to help with over the next few days:

First, I know that [waitlisted student] is on our club waitlist. I think we could use another 4th grader, so I’d like to be able to make room. Can one of you send [waitlisted student] an email ([email address]) with an invitation to join? Let me know if you have any concerns about this!

Second, I’m working with the blog/P.R. team to set up email lists for our members. This should make it very easy to email everyone in a specific group without knowing everyone’s individual email address. But I want to be sure I have the latest information about who is on what team. Can you send me a list of club members and adult advisers (with email addresses) grouped by team?

In fact, we should get these team lists out to everyone. If you’d like me to look over the lists you have, just send them to me first, and I’ll compare them to my notes before you send them out to everyone in the club.

December 18, 2012 in Reprap, Teaching, Technology by admin | No comments

The kids at this school are on a year-round schedule, and they get several weeks off between quarters. We placed our first real order after the last meeting of the quarter, and this is the email I sent to the accounting and BOM teams so they were in the loop.

Hello Accounting and BOM Teams! (Parents, please ask the kids to read this!)

I have some details about the first order we placed for hardware parts. This doesn’t include everything in the hardware category, but it is most of it–and it should be everything that we needed to order from McMaster-Carr. In cases where we only needed a few screws, lock nuts, etc, I didn’t order anything that I already had on hand–so that should save us a bit of cash.

For the BOM team, the only things we have left to find from the “hardware” category are the grub screws (which we can probably get from Ace Hardware–they have a great selection of things like that), the ring terminals (we can probably find these at Lowes), the glass sheet (I think the maker team found one of these in a scanner they took apart), and some springs. They also found a power cord, by the way.

Here are some details for the accounting team. Please record this transaction in your books so that we have a good record of it–we’re all counting on you to keep track of important things like this!

The vendor is McMaster-Carr, and I placed the order on December 16. The total amount attributable to our project was $45.98, and our project’s share of the shipping cost was only $3.42. This is a grand total of $49.40. I paid for it already, and so I’ll submit a receipt at some point in the future so that I can be reimbursed by the club.

The box of stuff should arrive tomorrow, and I’ll bring it for our next meeting.

December 16, 2012 in Reprap, Teaching, Technology by admin | No comments

Great news, everyone: The BOM team has successfully sourced a large number of hardware-related parts, and has found some great prices at a company called McMaster-Carr. After working with the accounting team, it looks like all the hardware is going to be within our hardware budget, and so I’ve gone ahead and placed the order! 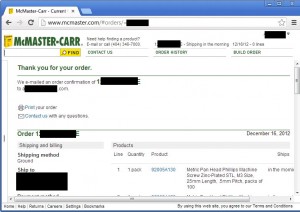 This order includes all the nuts, screws, washers, smooth rods, and some other parts. I actually went through the list and compared it to some parts that I have on-hand. In some cases where we only needed a couple of screws I went ahead and removed them from the order if I already had them. This should save us a few dollars. I also already have a couple of the springs we’ll need.

The most expensive part on the order was the smooth rod. We needed 2.4 meters for one printer, and because it is sold in 3-foot sections, that translates to 9 feet (about 2.75 meters) per printer. The cost of each 3-foot rod was almost $5!

Once I find out from McMaster-Carr what they’ll be charging me for shipping, I’ll be able to get a complete list of the expenses for this store (source) over to the accounting team.

December 16, 2012 in Reprap, Teaching, Technology by admin | No comments

One of the kids worked with his mother outside of the meeting time to develop a logo idea, as well as a tagline, mission, and vision. It’s the kids like this — the ones who really step up to the challenge — who I think are going to be the starts of the show. Here are the ideas they came up with. (Click for larger image.) 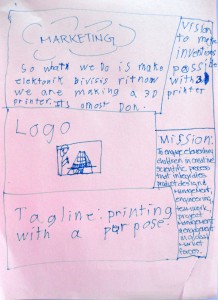 December 9, 2012 in Reprap, Teaching, Technology by admin | No comments

This email was sent to the entire team the weekend before the next Friday meeting, which will be the last meeting of the calendar year (due to holiday breaks).

We missed the fifth graders at the last meeting, but we hope to see them all again at our next meeting this Friday. Despite missing some of our key players, we have made quite a bit of progress before, during, and after that last meeting, so I wanted to update you all a bit. But first a couple of reminders…

REMINDERS: If you have a science notebook for this project, remember to bring it with you to the meeting. Also, if you get an email from another team member, adult adviser, or teacher, remember to read it thoroughly and respond to it promptly. It’s going to take us a very long time to build a 3D printer if we don’t put in the extra effort needed outside of meeting hours to pull this off, and each of you has an important role on this team!

We now have a completed part list! The build team has broken down the printer we’re going to build into six different categories of parts — X, Y, and Z axes, extruder, electronics, and “other” — and they’ve identified 129 different parts that we need to find. (Very special thanks to [student] for all his hard work on this task!)

The BOM team is now working on grouping and organizing those parts so that we’ll have a list of things to buy at each store. For example, the build team listed one motor for the X axis, one for the Y axis, two for the Z axis, and one for the extruder. The BOM team is combining all these line items into one that says “5 motors” and will be figuring out where to get them and how much they should cost.

The membership team has set up a membership list and should be distributing it soon to everyone on the team. I plan on printing out a copy and pasting it onto the inside cover of my science notebook. I believe we also have a wait list in place — there are already more students who want to join the club!

Unfortunately it doesn’t look like we’ll be able to host our club blog on the school’s website, but I believe the blog/P.R. team has a plan to get us up and running anyway. They worked with the school and the membership team to identify students with privacy concerns, and they’re setting up a website at a different address. I’m sure they’ll announce it to everyone when it’s up and running!

Finally, the maker team was hard at work again last week taking things apart and identifying useful components. They discovered that part of one of the printers they were disassembling looked a lot like the X axis on the 3D printer! There was a plastic carriage riding on two smooth rods with a belt attached to the back. The belt extended the length of the rods, and wrapped around an idler (freely spinning wheel) at one end and a pulley (geared wheel) attached to a motor at the other end. It might be too small to use for our printer, but we’ll hang onto it for when we think of something else we can build with it!

See you all on Friday!

December 5, 2012 in Reprap, Technology, Woodworking by admin | No comments

It’s not easy to find metric drill bits in the United States. For a lot of applications, letter, fractional, or wire gauge drill bits are accurate enough, are more commonly available, and are much more reasonably priced. This tables shows the closest larger drill bit size for metric sizes from 1 to 10mm. You can also view the spreadsheet directly.